Animus and the Constitution at Stetson Law 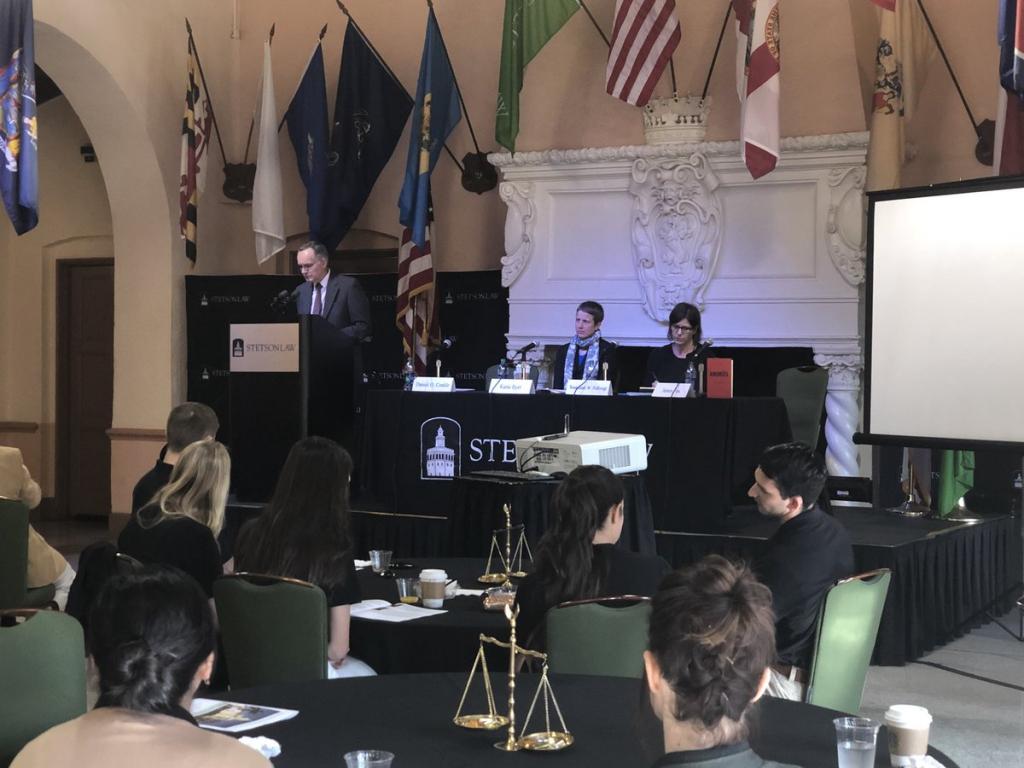 The concept of unconstitutional animus is, of course, on many people’s minds as the Supreme Court continues to mull over the legality of President Trump’s travel ban executive order. A few weeks ago, Stetson University College of Law was home to a day-long discussion of the concept of animus, centered on Bill Araiza's (Brooklyn Law School) 2017 book, Animus: A Short Introduction to Bias in the Law (NYU Press 2017). Links to the webcast of the morning and afternoon sessions are available for free, courtesy of Stetson.

The conference, held on April 20 at Stetson, started with a panel that discussed the general concept of animus and its workability.  That panel was composed of Dan Conkle (Indiana-Bloomington), Katie Eyer, (Rutgers-Camden), and Susannah Pollvogt (Arkansas). The discussion was spirited, as the panelists had very different views about the usefulness of the animus concept in modern equality law. Those views ranged from enthusiastic support, to a suggestion that courts focus more on renewing traditional and well-established equal protection doctrines, such as tiered scrutiny/suspect class analysis, to a concern that the animus concept serves to distract social justice litigators whose best litigation option is often straightforward rational basis review.

The second panel focused more heavily on animus in the context of the Constitution’s religion clauses. That panel was composed of Corey Brettschneider (Brown/Political Science), Christopher Lund (Wayne State), Micah Schwartzman (Virginia), and Nelson Tebbe (Cornell). The discussion on this panel turned on the very difficult questions of mixed motives and the role of religiously-motivated action in animus analysis. Defining animus in the context of religious thought presents a vexing problem—in particular, within a religious/philosophical system that sincerely holds certain beliefs about conduct and moral absolutes. The panelists also spoke about an issue that was a major subject of the oral argument on the travel ban case—when, and under what conditions, a taint of animus can be cleansed by a subsequent governmental assertion of neutral, legitimate goals.

Professor Araiza himself was up next, as he gave the keynote address over lunch. His speech called for, in his words, “calling things what they are”—that is, explicitly using the term animus when that is a fair characterization of the action under review. He cautioned that animus should not become an all-purpose label applied to any action that is alleged to violate equality principles, whether they’re found in the Equal Protection Clause, the religion clauses, or elsewhere. But, he concluded, animus can play a useful role in twenty-first century American constitutional law, as a limited doctrine that constitutes part but only part of the constellation of doctrines governing equality claims, especially in light of the resurgent xenophobia and cultural conflict that has engulfed the nation. He also suggested that a carefully-crafted animus doctrine can hearken back to the idea of “class legislation” that played such a critical role in nineteenth century judicial thinking about equality, both before and after 1868. By hearkening back to that older thinking, Professor Araiza suggested that animus doctrine serve an additional purpose in connecting modern equal protection doctrine to its historical antecedents.

A final panel considered animus from a diverse set of perspectives. This panel was comprised of Jessica Clarke (Minnesota), Osamudia James (Miami), Steve Sanders (Indiana-Bloomington), and John Tehranian (Southwestern). This panel considered the role animus plays in doctrines as disparate as employment law, racial equality, and LGBT rights. The discussion revealed the many ways that animus, broadly conceived, can play a constructive role in legal doctrine. For example, Professor Clarke explained how the “stray remarks” doctrine in employment law reflects a judicial unwillingness to confront explicit workplace statements of animus as relevant to a plaintiff’s employment discrimination claim.

Animus is clearly a central concern for progressives worried about recent turns in American politics and law. Thinking carefully about what constitutional doctrine of animus should look like should be high on the agenda. I’m glad my law school was able to host a conversation that played an important role in furthering that process.