Amazon and the Fight Over Whether Workers Can Have a Voice 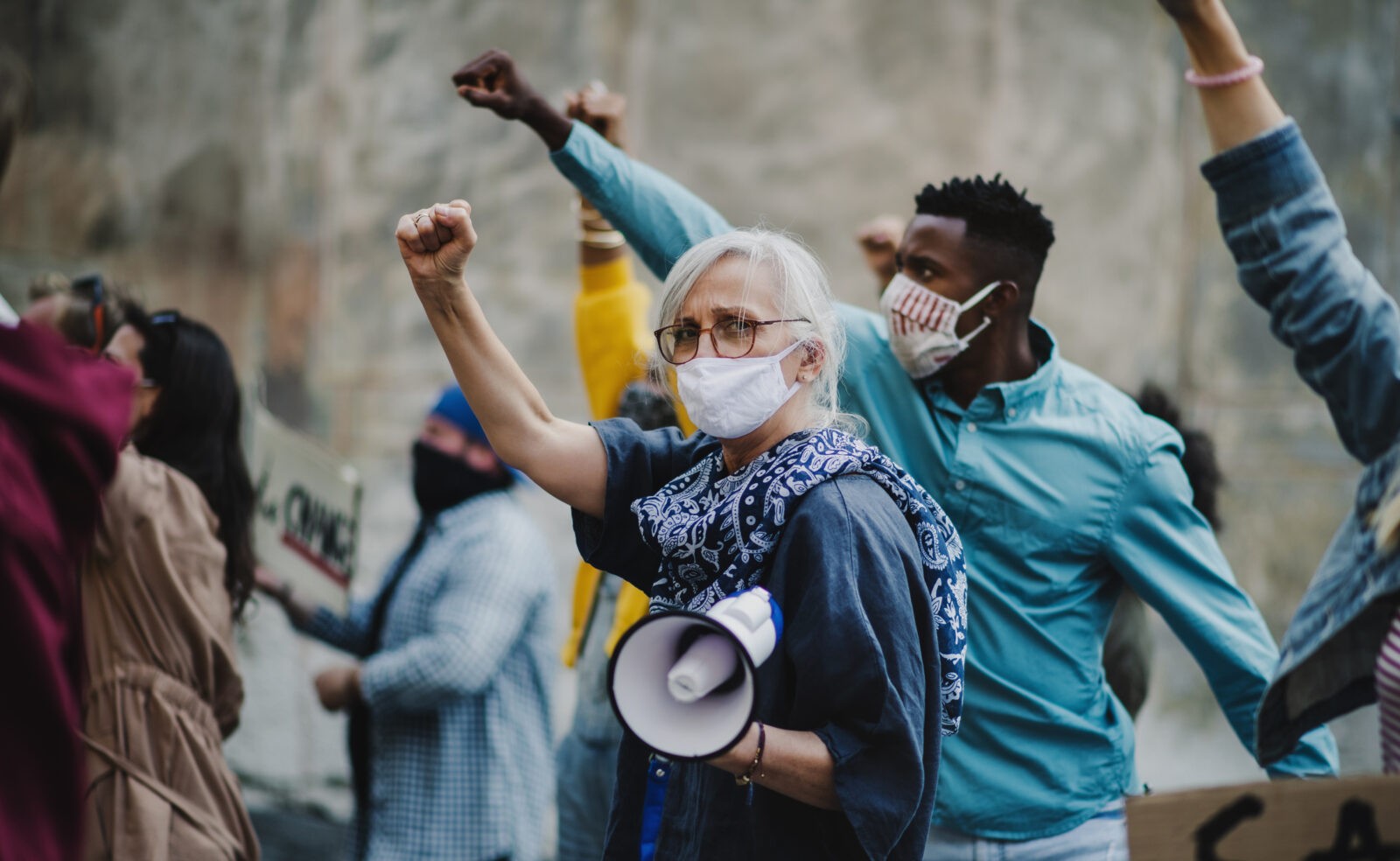 During the COVID-19 pandemic, fast food workers, nurses, home care workers, warehouse workers, food processing plant employees, and many others have joined together in protests, strikes, and union drives. They have demanded safe workplaces, and pay and benefits that reflect the essential work they do—in the words of SEIU members, “Respect Us, Protect Us, Pay Us.” Many of these workers are people of color who identify their fight as one for racial justice. Though their specific demands vary by workplace, these workers are advancing a common principle: that workers should have safety and dignity at work and a say in the policies that shape their jobs and their communities.

Amazon, the mega-behemoth retailer, web-services provider, and TV and movie studio, whose profits increased more than 200% during the pandemic, has been perhaps the most prominent company to respond to these worker demands by doubling down on the idea that it alone—not workers, not elected officials—should have the power to set its workplace policies. The idea that companies should be free from unions and government regulation is certainly not a novel one in the United States. But as a recent speech by President Biden supporting workers’ rights highlighted, that corporate position is actually very far removed from the ideals behind our nation’s labor laws. (It is worth noting that Andrew Devore, Amazon vice-president and associate legal counsel in charge of labor and employment matters, was until his recent resignation a member of the Board of the American Constitution Society.)

Congress passed the National Labor Relations Act (NLRA) in 1935 to allow workers to bargain collectively  with their employers in order to redress “the inequality of bargaining power” between workers and employers. It would be hard to find a better example of that inequality than the chasm between Amazon, the country’s second-largest employer which is owned by one of the world’s richest men, and the low-wage workers, more than a third of whom are Black or brown,  who work in its warehouses under constant electronic surveillance to ensure they meet unyielding, grueling productivity standards.

One of the first Amazon worker actions during the pandemic came in March 2020, when the first COVID case was reported at an Amazon warehouse in Queens. Workers staged walkouts to protest unsafe working conditions. Jonathan Bailey, who led one of the walkouts, filed an unfair labor practice charge with the National Labor Relations Board (NLRB) alleging that the day after the walkout, a manager interrogated him for an hour and a half, and then a week later wrote him up for harassment. The NLRB found enough merit in Bailey’s claim to issue a complaint against the company.

In April 2020, after several workers at an Amazon facility in Chicago tested positive for COVID-19, workers staged “safety strikes” demanding, among other things, that the company pay for health care for workers and their family members who became ill. Amazon allegedly retaliated against some of the striking workers, again by interrogating them and writing them up. The NLRB issued another unfair labor practice complaint, but around the same time, Amazon announced the closure of the facility where the safety strikers work.

More recently, in February 2021 Amazon filed an unusual preemptive lawsuit against New York State Attorney General Letitia James, days before she filed suit against the company for inadequate safety measures at its facilities in Queens and Staten Island, and for retaliating against workers. Amazon’s lawsuit sought to block AG James from “subject[ing] Amazon … to state oversight.” The complaint reads like a press release about the safety precautions Amazon has undertaken, combined with an indignant rejection of the idea that a state might have any role in setting or enforcing safety standards to protect employees during a pandemic.

To date, only one of the Amazon pandemic-era workplace actions has grown into a union election: the historic effort by predominately Black workers at a warehouse in Bessemer, Alabama to organize with the Retail, Wholesale and Department Store union (RSDWU). Amazon’s response has been relentless, threatening, and expensive: millions of dollars on consultants and law firms, a website called DoItWithoutDues.com, online ads, texts and four or five emails to workers per day, banners at the warehouse and flyers in the bathrooms, and “captive audience” meetings featuring videos and PowerPoint presentations.

The company’s messaging subtly and not-so-subtly threatens employees that they may lose pay and benefits if they decide to unionize. For instance its anti-union website tells workers that in collective bargaining “everything is on the table … know what’s at stake.” While it barrages workers with anti-union messages, it has also sought to block union organizers from the slivers of opportunity they have to talk to employees. For months organizers stood in the road outside the warehouse, starting at 3:45 in the morning, to speak with workers in their cars at a red light. But in the midst of the union drive Amazon successfully requested that the county change the timing of the traffic light so that cars would not stop as long.

Amazon has also fought to force workers to vote literally on its own turf. First it argued to the NLRB that the union election should be held in-person at its facilities despite the pandemic. Then, when the Board ordered a mail ballot election, Amazon encouraged employees to mail their ballots in a new mail box that was just installed outside its warehouse.

While Amazon’s anti-union tactics are receiving worldwide attention for their ferocity, they are common among American employers. As Steven Greenhouse put it in an op-ed in the Los Angeles times, “Union elections in the U.S. often resemble political elections in authoritarian nations such as Hungary.”

This is why it was such a jolt when, in the midst of the Bessemer election, President Biden released a video celebrating workers’ right to organize. He noted that the NLRA encourages collective bargaining and that unions “give you a stronger voice for your health, your safety, higher wages, protections from racial discrimination and sexual harassment.” He stated that employers should not engage in intimidation or threats. The speech was mostly unremarkable as a description of American labor history and the principles behind a decades-old law. But it was also unprecedented as an implicit endorsement of an ongoing union drive and a repudiation of common anti-union practices by a sitting President.

Among the reasons for the huge distance between the values behind our labor laws and the reality of union-busting by American companies like Amazon is that the consequences for violating the NLRA are laughable. In many cases the only penalty is that the employer is required to post a notice promising they will not violate the law again. When employers fire workers in retaliation for exercising their right to unionize, as they are alleged to do in 20-30% of union drives, the worker can at most win reinstatement and back pay, minus the pay they earned or “could have” earned at another job while fired. The NLRA provides for no civil penalties or punitive damages, so employers often calculate that it is worth it to break the law to avoid sharing power with their workers.

The Protecting the Right to Organize (PRO) Act is a bill pending in Congress that would create real penalties for NLRA violations and make it easier for employees to challenge unfair labor practices. It would also update the nation’s labor laws in several other important respects: it would ban captive audience meetings, bar employers from permanently replacing striking workers, prohibit misclassification of employees as independent contractors, and create a process to get newly-unionized workers and employers to a first contract in a reasonable amount of time. The act would, in effect, guide our labor law back toward the values that motivated its enactment more than 80 years ago.

Black, white and brown workers in the United States have long done essential work for inadequate pay and benefits, in unsafe conditions, and without the collective power of being part of a union. The injustice of that reality has become even more obvious and pronounced during the pandemic. The pandemic has also exacerbated the already gaping disparity of wealth and income in our country, and has disproportionately ravaged communities of color, all in the shadow of a national reckoning on systemic racism.

This terrible confluence of circumstances may have pushed workers to new levels of willingness to insist on their right to have a voice at work. But it is not fair to expect that workers’ courage alone will be enough to overcome entrenched corporate hostility and legal indifference to collective action by workers. The Alabama union election will be over at the end of March. No matter the outcome, this will not be the last union drive sparked by the pandemic. The question is not whether workers want to have power on the job to shape the future of their communities, but whether the rest of the country--Congress, the courts, employers, and the public--will step up to defend their right to have it.