ACS’s State and Grassroots Work is Stronger Than Ever 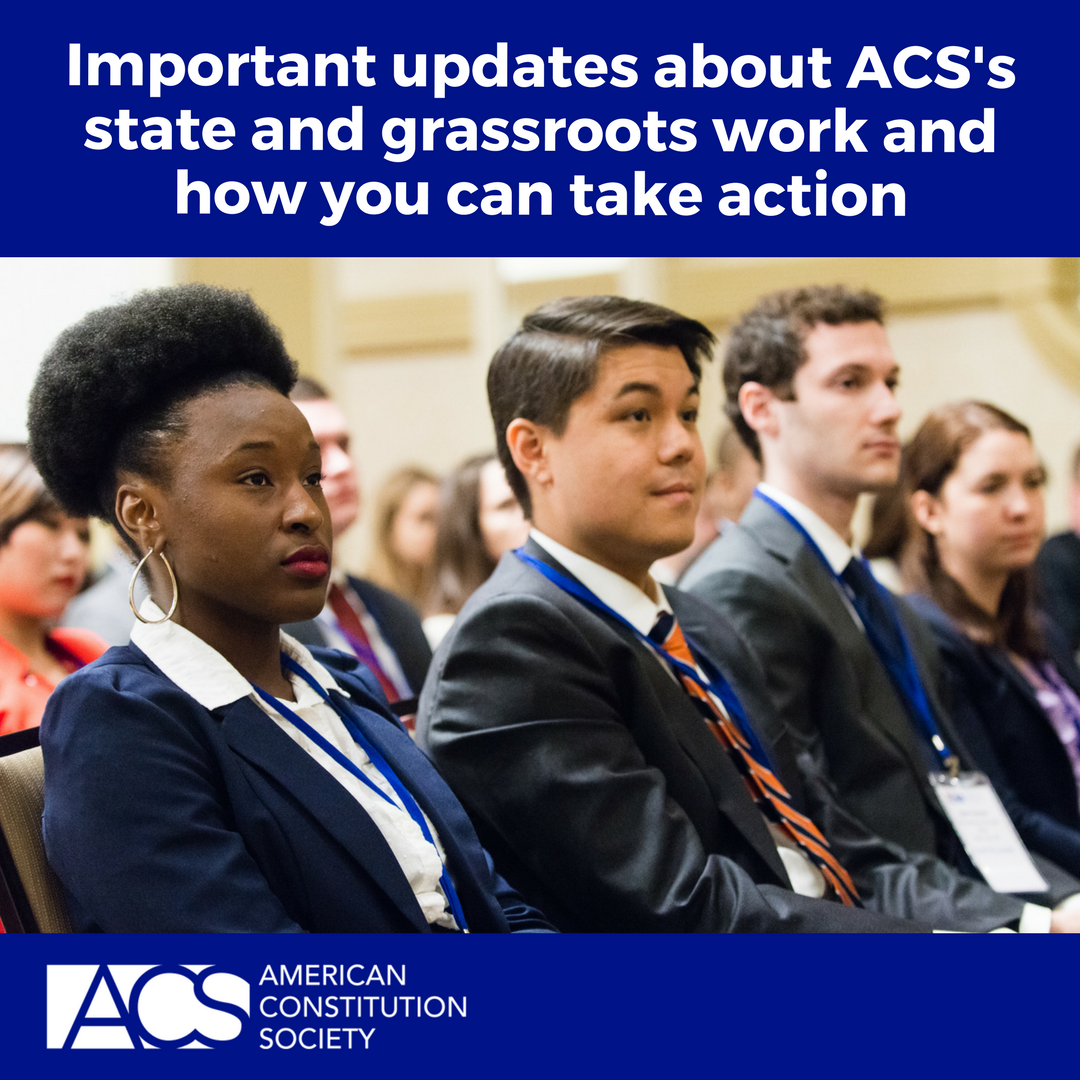 Without question, ACS’s work has never been more important than it is today. We believe in the rule of law and that the law should be a force to improve the lives of all people. President Trump and his administration, on the other hand, have shown incredible hostility – and often blatant disregard – toward our Constitution, our system of checks and balances, and our judiciary. ACS is standing up to these assaults by collaborating with coalition partners on policy solutions and mobilizing a progressive legal network on many fronts to fight back. Below are some highlights of our recent efforts.

As independent government officials, state attorneys general can mount serious challenges to administrative actions, federal laws, and even their own state’s laws. Given the current political environment and the many issues to be addressed beyond, state AGs are often the only state officials able to protect the interests of their constituents. They are uniquely positioned to confront the challenges posed by the Trump Administration and a Department of Justice that has already begun to abdicate many of its prior roles and responsibilities in protecting critical rights.

With that in mind, ACS is serving as a resource for state AGs, their staffs, and advocates. We are providing attorneys general offices strategies, best practices, resource allocation, leadership cultivation, and vital relationship building with community members, to maximize the effectiveness of their work on key issues, such as immigration, civil rights, labor rights, consumer protection, criminal justice, and redistricting. This project will continue beyond the Trump years because of the vital role that state attorneys general play in protecting and advancing core rights.

ACS is also fighting back against the surge of onerous voting restrictions that disproportionately – and often intentionally – affect marginalized communities, particularly people of color, students, senior citizens, people with disabilities, and those who are low income. With an administration and Congress hostile to voting rights, litigation is one of the most promising remedies available to voters seeking to protect their right to vote.

Through the Voting Rights Institute, we provide intensive trainings for law students and practitioners on the enforcement of voting rights and election laws. We’ve already held 18 VRI trainings in cities across the country with more planned for later this year.

We also partnered with the Lawyers’ Committee for Civil Rights Under Law and Lawyers for Good Government to launch Election Watch, a nonpartisan program designed to ensure that at least one trained volunteer lawyer in every county in the U.S. is keeping tabs year-round on voting changes at the local level. Many of these volunteer lawyers are trained by our Voting Rights Institute. The goal is to proactively identify and fix voter suppression problems prior to elections.

For lawyers in the ACS network interested in running for elected office, we provide support and information on key areas such as building a support network, balancing work and running for office, staffing and managing a campaign, and fundraising.

To encourage participation, we regularly collaborate with other progressive organizations including our current partnership with the ACLU of Northern California to increase education on how prosecutors can be a stronger force for criminal justice reform. California was chosen because 56 of its 58 district attorney seats are up for election in 2018. We are holding a series of forums within legal communities across the state on the need for progressive prosecutors and how to run for office.

Mobilizing Our Network to Help Communities in Need

Our nationwide network – including more than 200 student and lawyer chapters – is a powerful asset for organizations who seek to connect lawyers and students to individuals and communities in need. Since the election, hundreds of members from across the country have volunteered to help with pro bono projects, including the following:

·       Veteran reimbursement - Volunteers helped veterans in numerous states apply for loan forgiveness or reimbursement through the U.S. Department of Education’s remediation program that many feared would be eliminated by the Trump Administration.

·       Voting - We are coordinating with Spread the Vote to organize Voter ID Clinics in targeted states to pair voters who need state IDs with attorneys who can help them obtain the necessary documentation. Currently, we are working to get our Virginia-based student chapters involved in clinics in anticipation of the state’s elections in November. Efforts are being expanded to other states.

In addition, ACS supports groups working on the forefront of these issues. For example, we helped a national advocacy organization that focuses on afterschool programs provide an informational webinar to its members’ staff regarding immigration enforcement in schools and how they can best assist the families they serve.

Growing Our Network – Expanding Our Reach

ACS has more than 200 student and lawyer chapters located in almost every state and on most law school campuses, and we’re continuing to grow. Since the election, we’ve added lawyer chapters in Knoxville, Las Vegas, Philadelphia, Cincinnati, Athens (GA), and three in Missouri – as well as 18 new student chapters.

If you haven’t yet joined an ACS chapter, visit ACSLaw.org/chapters to locate and connect with your nearest chapter – or email LCemails@acslaw.org to start a chapter in your area. More than ever, we need your support to continue our fight!

You can take action by making a special tax-deductible donation to help ACS continue to channel the renewed energy of progressives across the country and mobilize them to action.

By growing our nationwide network and expanding our reach – and by furthering our efforts at the state and grassroots levels – we are establishing a powerful and formidable counterforce in this current political climate. We have a very large “to do” list – but too much is at stake for us to back down.