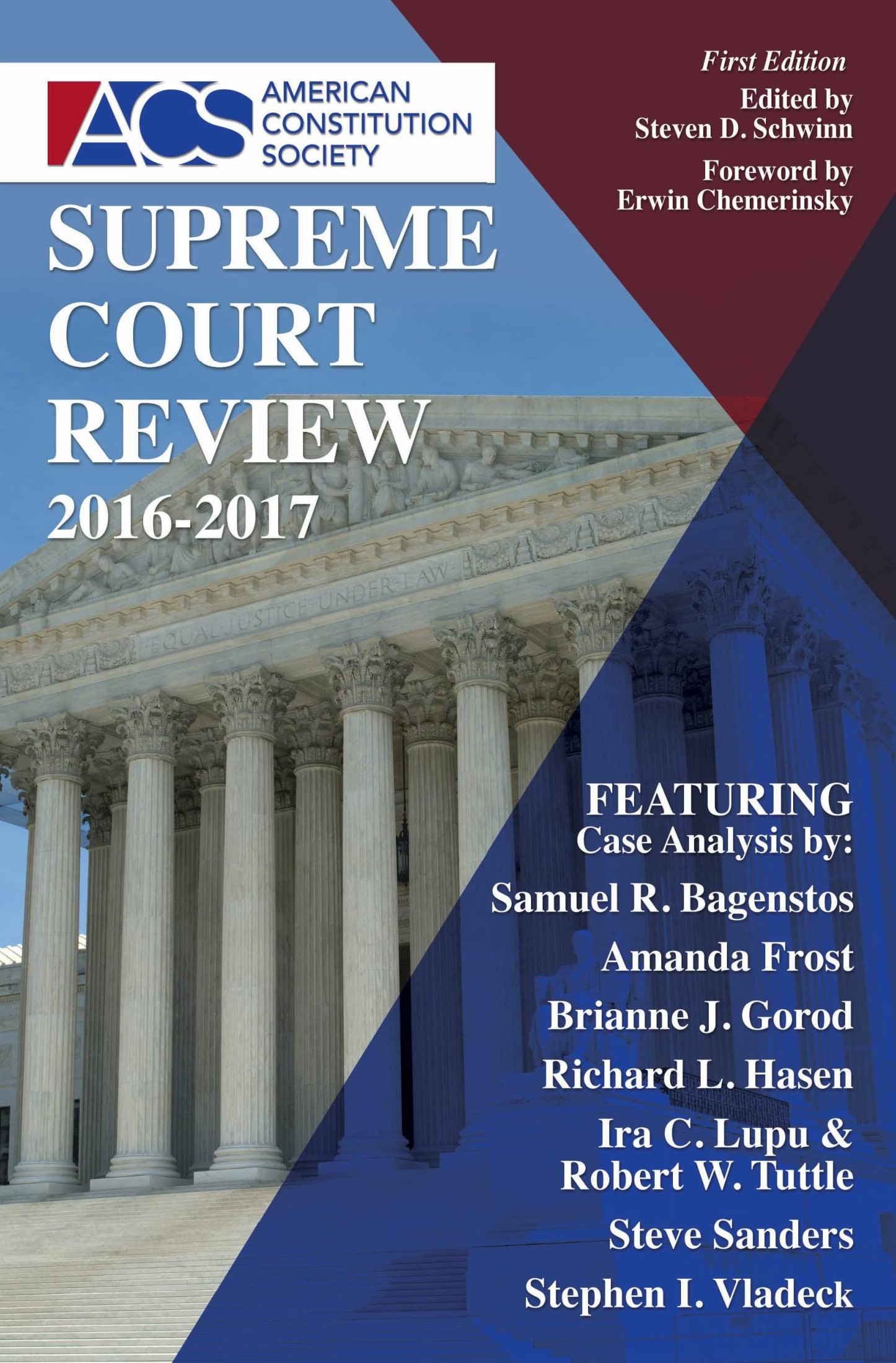 We are thrilled to bring you this inaugural edition of the American Constitution Society Supreme Court Term Review. In these pages, you’ll find a series of outstanding critical essays, penned by the nation’s top legal scholars and practitioners, on the most important cases and themes from the Supreme Court’s October 2016 Term. You’ll also find a splendid Foreword, written by Dean Erwin Chemerinsky, that puts these cases and themes in the broader context of key happenings and trends at the Court.

In the many panels and reviews of the Court’s October 2016 Term, we sometimes heard that the Term was unremarkable, with no Big Blockbuster cases, no significant changes in the law, and no notable impacts on major political issues—at least as compared to so many other recent Terms. Many said that this was the direct result of an eight-member, equally divided Bench for most of the Term. That is: the Court was reluctant to take on major controversial cases without a full staffing.

But I think you’ll find in these pages that this description of the Term is not exactly right. Indeed, I think you’ll find that there were several quite significant rulings, even if they did not receive the kind of attention that the Blockbusters received in other prior Terms. And while these cases may not hit with the same immediate impact of some other major recent rulings, as our authors explain, their full impacts will unfold slowly, over time.

So here is perhaps a better way to summarize the October 2016 Term: The Court dealt with somewhat lower profile cases that often flew below the radar (at least comparatively speaking), but nevertheless resulted in significant changes in the law that we’ll see over the next several years and decades.

Moreover, the major cases last Term split between conservative constitutional rulings and progressive ones. As you’ll read in the following pages, on the one hand, the Court gave progressive constitutionalists plenty to worry about, from much enlarged religious liberty claims,₁ to sharply curtailed Bivens claims,₂ to (yet further) restraints on access to justice.₃

On the other hand, the Court gave progressive constitutionalists some important reasons to celebrate. The Court handed victories to progressive causes in a consolidated pair of fair housing cases,₄ election-law cases,₅ a pair of IDEA cases,₆ an immigration case,₇ criminal procedure cases,₈ and a marriage-equality case.₉

And the Court ruled in favor of free-speech rights in three First Amendment cases.₁₀

Along with the cases and trends, as Dean Chemerinsky reminds us, no analysis of the Term would be complete without at least mentioning Justice Gorsuch, the Court’s newest member. Although he participated in only a handful of cases last Term, he has already staked his territory on the Court, aligning squarely with the Court’s most conservative wing. He also relished in his active participation, and did not shy away from sharing his opinions, even taking on the Chief (in a concurrence, no less).₁₁

In short, Justice Gorsuch proved himself to be quite conservative. And he was no wallflower. If this trend continues, he will be a major conservative force on the Court for decades to come.

Still, we can’t but compare Justice Gorsuch’s track record with the expected record of an imagined Justice Merrick Garland, whose nomination the Senate railroaded in the dishonest name of “leaving Justice Scalia’s replacement to the voters.” (And we can’t but compare the Court’s track record, now and in the future, with Justice Gorsuch instead of a Justice Garland.) We’ll see soon enough the impact of the Senate’s infamous and unprecedented take-down of Chief Judge Garland when the Court starts issuing major 5-4 rulings this current Term. (We’ll report back on this in next year’s edition.)

This inaugural Review would not have been possible without the support and effort of a number of individuals. First, I’d like to thank ACS President Caroline Fredrickson and the entire staff at the ACS for supporting this project. Next, special thanks go to Kara Stein, the Vice President for Policy Development and Programming. Without Kara’s vision, support, and patience, this project could not have happened. Special thanks also go to Melissa Wasser, Law Fellow, whose tireless efforts ensured that our copy came out clean. (All editorial errors, of course, remain my own.) Finally, I’d like to thank our authors. These are national leaders in constitutional thinking, writing, and practice, and they graciously took time from their already-too-busy schedules to contribute to this publication. Thank you all.

I hope you enjoy reading this volume as much as I’ve enjoyed editing it.

1 Trinity Lutheran Church of Columbia v. Comer, 137 S. Ct. 2012 (2017) (holding that a state’s express policy of denying public grants to any applicant owned or controlled by a church violates the Free Exercise Clause).

3 Bristol-Myers Squibb Co. v. Superior Court of California, 137 S. Ct. 1773 (2017) (holding that state courts lacked specific jurisdiction to hear claims brought by plaintiffs who were not state residents, because there was not a sufficient connection between the forum and the specific claims at issue).

6 Fry v. Napoleon Community Schools, 137 S. Ct. 743 (2017) (holding that exhaustion under the Individuals with Disability Education Act is unnecessary when the basis of the plaintiff’s suit is something other than the denial of the IDEA’s core guarantee of a “free appropriate public education”); Endrew F. v. Douglas County School District, 137 S. Ct. 988 (2017) (holding that under the IDEA a school must offer an “individualized education program” reasonably calculated to enable a child to make progress appropriate in light of the child’s circumstances).

7 Maslenjak v. U.S., 137 S. Ct. 1918, 1923 (2017) (holding that the government must establish that a defendant’s illegal act played a role in her acquisition of citizenship in order to convict for “procur[ing], contrary to the law, the naturalization of any person”).

8 Buck v. Davis, 137 S. Ct. 759 (2017) (holding that a criminal defendant demonstrated ineffective assistance of counsel when his attorney put on testimony that the defendant’s race predisposed him to violent conduct); Peña-Rodriguez v. Colorado, 137 S. Ct. 855 (2017) (holding that the Sixth Amendment requires that the no-impeachment rule give way in order to allow the trial court to consider evidence of a juror’s statement that he relied on racial stereotypes to convict a criminal defendant).