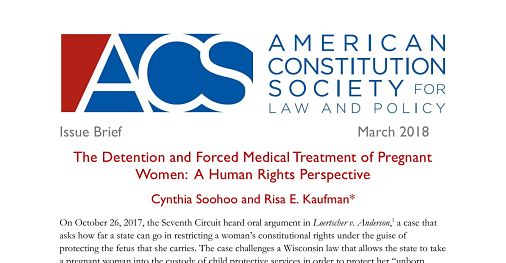 How far can a state go in restricting a woman’s constitutional rights under the guise of protecting a fetus? The Seventh Circuit will soon have the opportunity to answer this question when it issues its much-anticipated decision in Loertscher v. Anderson. The case challenges a Wisconsin law that allows child protective services to take a pregnant woman into custody to protect her “unborn child,” from “the time of fertilization to the time of birth,” based on concern that the woman’s purported use of alcohol or controlled substances poses a “substantial risk” to the physical health of her “unborn child.”

Wisconsin’s law is unique in that it places a woman in the custody of child protective services. However, several other states allow or promote use of civil commitment laws to detain pregnant women. Civil statutes that detain pregnant women to prevent future substance use and force them to undergo drug treatment raise serious constitutional issues related to a woman’s right to liberty, privacy, personal autonomy, and non-discrimination.

As we argue in a new ACS Issue Brief, they also violate core human rights principles.

Universal human rights standards recognize that every person has the right to be free from arbitrary detention and forced medical treatment. Women do not lose these rights when they become pregnant. Indeed, human rights bodies emphasize the importance of incorporating a gender perspective to ensure that physical differences between women and men -- such as the capacity to be pregnant -- as well as stereotypical attitudes about women’s ability and right to make their own health care decisions, are not used to undermine women’s equal enjoyment of their human rights. Human rights bodies have explicitly rejected the idea that fetal interests can be considered separately from, or promoted to the detriment of, pregnant women. And human rights standards emphasize that pregnant women must be treated with dignity and respect.

International human rights experts have raised concern about statutes like the one at issue in Loertscher. In October 2016, at the conclusion of an official fact-finding visit to the United States, in addition to raising due process concerns, the U.N. Working Group on Arbitrary Detention described such laws as a “form of deprivation of liberty [that] is gendered and discriminatory . . . , as pregnancy combined with the presumption of drug or other substance abuse, is the determining factor for involuntary treatment.” It recommended that laws like Wisconsin’s that purport to seek to promote maternal and fetal health “be replaced with alternative measures that protect women without jeopardizing their liberty.”