Private: Who Is Michael Luttig?

J. Michael Luttig has served as a judge on the Fourth Circuit since 1991, having been appointed by former president George H. W. Bush. At 37, he was the youngest person to serve as a federal appellate judge. Like the President (and Harriet Miers) he is a Texan. He received his undergraduate degree from Washington and Lee and his J.D. from the University of Virginia. After briefly working in the White House, he spent several years clerking (for now-Justice Scalia at the DC Circuit and Chief Justice Warren Burger at the Supreme Court) before entering private practice and then holding several positions in the Department of Justice. At the Justice Department, he provided counsel to the White House during the nominations of Justices Thomas and Souter. He is 51 years old. 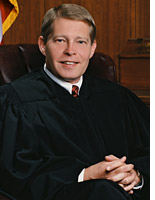 His reputation is as a hard-line conservative, though even liberal opponents concede that he is very smart. However, "Luttig can be heavy-handed with both his colleagues and the law; he hounds his fellow judges when he doesn't think their opinions measure up to his own exacting standards." According to Slate,

Luttig is often cast as a mini-Scalia. The characterization fits him well. In his judicial opinions, he sometimes rejects the statesman model in favor of cutting sarcasm and has shown a tendency to adhere to his own restrained method of judging even on the rare occasions when it leads him to unpopular or anti-conservative positions. Fairly or not, Luttig watchers invariably speculate as to whether a personal tragedy in his past-the murder of his father in a carjacking in 1994-has influenced his approach to criminal law.

Unlike Miers, Judge Luttig is expected to receive enthusiastic support from conservatives based on his well-known record.
Federalism: Judge Luttig wrote the Fourth Circuit opinion striking down certain aspects of the Violence Against Women Act, an opinion later upheld in the Supreme Court's decision in United States v. Morrison. Luttig found that the Act "addresses violent crime arising from the irrational motive of gender animus, a type of crime relatively unlikely to have any economic character at all."
These views on federalism extend to other policy areas as well, including environmental regulation. In Gibbs v. Babbitt, he found that some regulations promulgated under the Endgandered Species Act did not have enough of a nexus to interstate commernce to be constitutional.
Death Penalty: Judge Luttig has a long record of death penalty support, but much of the focus in this area has been on his personal life. Judge Luttig's father was shot and killed by a 17-year old during a carjacking in 1994. Due mostly to the defendant's age, the case reached the Supreme Court where three justices recused themselves based on their relationship with Luttig and the defendant was ultimately executed. During the initial trial, Judge Luttig took the stand to deliver a victim impact statement mourning his father. Since that time, Judge Luttig has resisted calls to recuse himself from death penalty cases. Both before and after his father's death, he has never voted in favor of a defendant in a death penalty case.
Freedom of Speech: Judge Luttig found South Carolina's offering of "Choose Life" license plates without a pro-choice alternative to be viewpoint discrimination and therefore an unconstitutional regulation of speech.
Civil Rights: Writing in dissent, Judge Luttig argued that school districts rather than parents should have the burden of showing that they are providing mandated services for individual disabled students. "Addressing the interests of convenience and fairness, Judge Luttig emphasized that school districts have comparative advantages of insti-tutional knowledge and superior resources that recommend compelling them to demonstrate that they have fulfilled their obligations under the IDEA."
Abortion: Judge Luttig's opinions on abortion are slightly mixed. He voted to uphold Virginia's parental notification law, and wrote an emergency opinion upholding the state's late-term abortion ban, a decision for which he was criticized as being hand-picked by the state. However, after the Supreme Court held that other such bans were impermissably broad he agreed to strike down Virginia's law, writing that the constitutional right to an abortion is at this point "super-stare decisis." In Richmond Medical Center v. Gilmore he wrote,

As a court of law, ours is neither to devise ways in which to circumvent the opinions of the Supreme Court nor to indulge delay in the full implementation of the Court's opinions. Rather, our responsibility is to follow faithfully its opinions, because that court is, by constitutional design, vested with the ultimate authority to interpret the Constitution.

Whether this means that the judge believes less restraint is required on abortion issues from a seat on the high court itself remains to be seen.